Being First – Sandra Day O’Connor and Madeleine Albright in Conversation 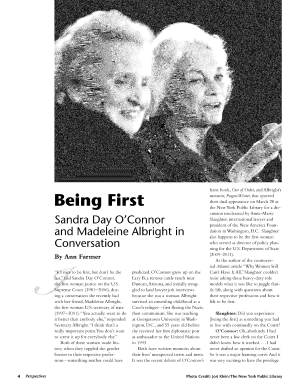 "It's nice to be first, but don't be the last," said Sandra Day O'Connor, the first woman justice on the U.S. Supreme Court (1981-2006), during a conversation she recently had with her friend, Madeleine Albright, the first woman U.S. secretary of state (1997-2001). "You actually want to do it better than anybody else," responded Secretary Albright. "I think that's a really important point. You don't want to screw it up for everybody else."

Both of these women made history when they toppled the gender barrier in their respective professions-something neither could have predicted. O'Connor grew up on the Lazy B, a remote cattle ranch near Duncan, Arizona, and initially struggled to land lawyer job interviews because she was a woman. Albright survived an unsettling childhood as a Czech refugee-first fleeing the Nazis, then communism. She was teaching at Georgetown University in Washington, D.C., and 55 years old before she received her first diplomatic post as ambassador to the United Nations in 1993.

Both have written memoirs about their lives' unexpected twists and turns. It was the recent debuts of O'Connor's latest book, Out of Order, and Albright's memoir, Prague Winter, that spurred their dual appearance on March 28 at the New York Public Library for a discussion moderated by Anne-Marie Slaughter, international lawyer and president of the New America Foundation in Washington, D.C. Slaughter also happens to be the first woman who served as director of policy planning for the