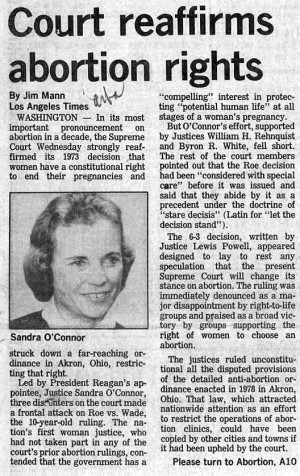 View PDF of article
© Copyright Notice: The images and text of this article constitute copyrighted material. The O'Connor Institute thanks Times Media Group for granting permission for these materials to be posted on the O'Connor Online Archive for non-commercial, educational purposes only. Use of these materials for any other purpose is not permitted without additional written permission from Times Media Group.

WASHINGTON - In its most important pronouncement on abortion in a decade, the Supreme Court Wednesday strongly reaffirmed its 1973 decision that women have a constitutional right to end their pregnancies and struck down a far-reaching ordinance in Akron, Ohio, restricting that right.
Led by President Reagan's appointee, Justice Sandra O'Connor,
three dissenters on the court made
a frontal attack on Roe vs. Wade,
the 10-year-old ruling. The nation's first woman justice, who
had not taken part in any of the
court's prior abortion rulings, contended that the government has a
"compelling" interest in protecting "potential human life" at all stages of a woman's pregnancy.

But O'Connor's effort, supported by Justices William H. Rehnquist and Byron R. White, fell short. The rest of the court members pointed out that the Roe decision had been "considered with special care" before it was issued and
said that they abide by it as a
precedent under the doctrine of
"stare decisis" (Latin for "let the
decision stand").
The 6-3 decision, written by
Justice Lewis Powell, appeared
designed to lay to rest any
speculation that the present
Supreme Court will change its
stance on abortion. The ruling was
immediately denounced as a major disappointment by right-to-life
groups and praised as a broad victory by groups supporting the
right of women to choose an
abortion.
The justices ruled unconstitutional all the disputed provisions
of the detailed anti-abortion ordinance enacted in 1978 in Akron,
Ohio. That law, which attracted
nationwide attention as an effort
to restrict the operations of abortion clinics, could have been
copied by other cities and towns if
it had been upheld by the court.

Specifically, the justices ruled in the Akron case that:
• Government officials may not require that all abortions
after the first trimester (the first three months) of pregnancy be performed in a hospital. The court said that the most
recent medical evidence shows that many abortions in the
second trimester can be performed safely in outpatient aborllon clinics.
• Government officials may notforce women seeking abortions to wait for a specific "cooling-off" period before the
operation is performed. The Akron law had barred doctors
from perfonning abortions for 24 hours after a woman sign~
ed a consent form, to give the woman a chance to change her
inind.
• Government officials may not require that the "attending
I)hysician" who perfonns an abortion personally give the
woman counseling beforehand. Instead, the court held that
any "qualified person," such as a trained nurse or social
worker, can do the counseling and get a woman's consent to
an abortion.
• Finally, government officials do not have "unreviewable
authority" to decide what a woman must be told before she
consents to an abortion. The justices struck down an Akron
regulation that required all women seeking abortions to be
given all the anatomical characteristics of the fetus, to be
warned that abortion is "a major surgical procedure" and to
be told that "the unborn child is a hwnan life from the moment of conception.''
In a separate ruling on a Missouri law, the justices again
struck down a requirement that all abortions after the first
trimester of pregnancy be performed in a hospital. But in
this case, the justices upheld some other regulations on
grounds that they do not seriously restrict a woman's right
to an abortion.
One of those rules requires a pathology report on any abortion. Another specifies that a second physician be present
whenever an abortion is performed in the late stages of
pregnancy. The third requires minors to get the approval
either of a parent or a juvenile court judge before having an
abortion.
Those regulations were narrowly approved, 5-4. Justices
Harry Blackmon, John Stevens, William Brennan and
Thurgood Marshall said that they believed the court should
have struck down these rules too.
In Roe vs. Wade, the court held that the right to privacy,
based on the guarantees of liberty in the Constitution, encompasses a woman's right to decide whether to have an
abortion. The vote in that case was 7-2, with Rehnquist and
White dissenting.