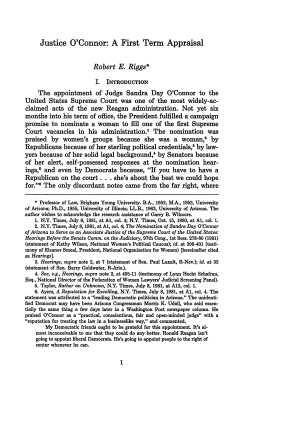 The appointment of Judge Sandra Day O'Connor to the United States Supreme Court was one of the most widely-ac claimed acts of the new Reagan administration. Not yet six months into his term of office, the President fulfilled a campaign promise to nominate a woman to fill one of the first Supreme Court vacancies in his administration.1 The nomination was praised by women's groups because she was a woman,2 by Republicans because of her sterling political credentials,3 by law yers because of her solid legal background,• by Senators because of her alert, self-possessed responses at the nomination hear ings,11 and even by Democrats because, "If you have to have a Republican on the court... she's about the best we could hope for."6 The only discordant notes came from the far right, where

N.Y. Times, July 8, 1981, at Al, col. 4; The Nomination of Sandra Day O'Connor of Arizona to Serve as an Associate Justice of the Supreme Court of the United States: Hearings Before the Senate Comm. on the Judiciary, 97th Cong., 1st Sess. 278-80 (1981) (statement of Kathy Wilson, National Women's Political