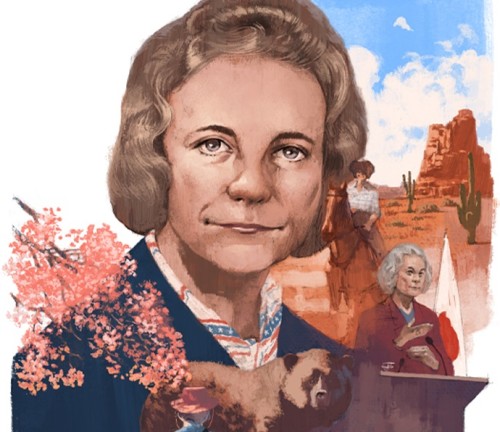 See the world and you’ll be a better judge of everything. That’s what retired Supreme Court Justice Sandra Day O’Connor taught the women and men who worked for her.

When Sandra Day O’Connor graduated near the top of her class from Stanford Law School in 1952, she called at least 40 law firms looking for a job. Only one would even give her an interview. The partner asked, “How well do you type?” She said she didn’t want to be a legal secretary.

O’Connor went on to have astonishing success in the law and became the first ever woman on the U.S. Supreme Court (appointed by President Reagan in 1981). Today, at a time when half of all law students are women, her achievement is perhaps easy to take for granted.

Justice O’Connor, who is 89 years old and suffering from dementia, is not as well-known as Ruth Bader Ginsburg, who joined the Court in 1993, 12 years after O’Connor, but she was a trailblazer in her own way. O’Connor did not use the word “feminist,” and she was not an activist for women’s rights, yet she played a huge role advancing them. She knew what it was to be a role model for women and would say, “It’s good to be first, but you don’t want to be the last.” In public, O’Connor came across as a combination of tough cowgirl and country-club Republican—smart and stylish when she was a younger woman, and then a little matronly, but always with flashing, almost piercing eyes. She could be at once intimidating and warm.

During her 25 years on the Supreme Court, and for many

© COPYRIGHT NOTICE: This Media Coverage / Article constitutes copyrighted material. The excerpt above is provided here for research purposes only under the terms of fair use (17 U.S.C. § 107). To view the complete original, please visit Southwestmag.com.