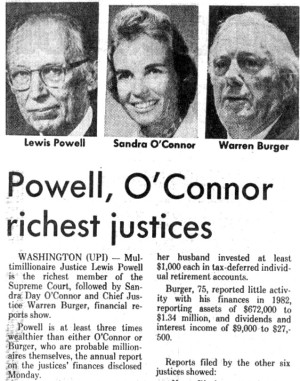 ITEM DETAILS
Type: Newspaper article
Author: United Press International
Source: Phoenix Gazette
Collection: The Kauffman-Henry Collection
NOTE: Due to copyright restrictions, the high-resolution scans and full text of this article are not currently available. The O'Connor Institute will publish that content if and when it receives permission from the copyright holder, Gannett. Please contact us at the email address at the bottom of this page with any questions.

WASHINGTON (UPI) - Multimillionaire Justice Lewis Powell is the richest mem her of the Supreme Court, followed by Sandra Day O'Connor and Chief Justice Warren Burger, financial reports show. Powell is at least three times wealthier than either O'Connor or Burger, who are probable millionair.es themselves, the annual report on the justices' finances disclosed Monday. • Rut millionaires are in the minority on the bench. At least a half-million dollars down the financial ladder are the other six justices, who supplement their $96,700 salaries with modest to substantial amounts of interest and dividends. At the bottom of the list is Thurgood Marshall, the only black on the court. The annual reports, which are reqoired under the Ethics in Goverment Act, showed no dramatic jumps or declines in the justices' financial affairs compared to last , year . . Powell, 75, handily clung to his status as the high tribunal's weal- ':': thiest member, listing assets of .... between $2.6 million and $5.7 million for 1982, including property and .several family trusts. O'Connor, 53, and her lawyer husband reported 1982 assets of at -. least $876,000 and possibly more than $1.66 million, with investment . income ranging from $36,200 to a maximum of $117,000. O'Connor, who became the first woman on the high court in 1981, reported receiving a $350 gift of a "family quilt," and both she and her husband invested at least $1,000 each in tax-deferred individual retirement accounts. Burger, 75, reported

© COPYRIGHT NOTICE: This Media Coverage / Article constitutes copyrighted material. The excerpt above is provided here for research purposes only under the terms of fair use (17 U.S.C. § 107). To view the complete original, please retrieve it from its original source noted above.