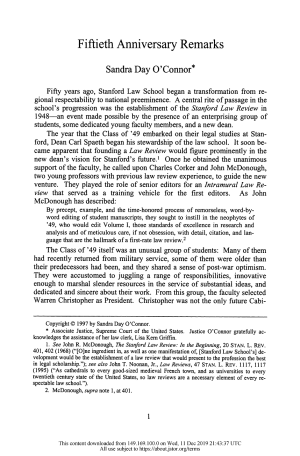 Fifty years ago, Stanford Law School began a transformation from regional respectability to national preeminence. A central rite of passage in the school's progression was the establishment of the Stanford Law Review in 1948-an event made possible by the presence of an enterprising group of students, some dedicated young faculty members, and a new dean. The year that the Class of '49 embarked on their legal studies at Stanford, Dean Carl Spaeth began his stewardship of the law school. It soon became apparent that founding a Law Review would figure prominently in the new dean's vision for Stanford's future.1 Once he obtained the unanimous support of the faculty, he called upon Charles Corker and John McDonough, two young professors with previous law review experience, to guide the new venture. They played the role of senior editors for an Intramural Law Review that served as a training vehicle for the first editors. As John McDonough has described:

By precept, example, and the time-honored process of remorseless, word-byword editing of student manuscripts, they sought to instill in the neophytes of '49, who would edit Volume I, those standards of excellence in research and analysis and of meticulous care, if not obsession, with detail, citation, and language that are the hallmark of a first-rate law review.2

The Class of '49 itself was an unusual group of students: Many of them had recently returned from military service, some of them were older than their predecessors had

© COPYRIGHT NOTICE: This Speech / Interview / Article by Justice O'Connor constitutes copyrighted material. The excerpt above is provided here for research purposes only under the terms of fair use (17 U.S.C. § 107). To view the complete original, please visit Jstor.org.