Foreword: The Changing Role of the Circuit Justice 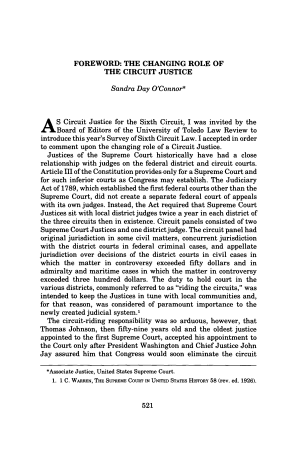 FOREWORD: THE CHANGING ROLE OF THE CIRCUIT JUSTICE

S Circuit Justice for the Sixth Circuit, I was invited by the Board of Editors of the University of Toledo Law Review to introduce this year's Survey of Sixth Circuit Law. I accepted in order

to comment upon the changing role of a Circuit Justice.

Justices of the Supreme Court historically have had a close relationship with judges on the federal district and circuit courts. Article III of the Constitution provides.only for a Supreme Court and for such inferior courts as Congress may establish. The Judiciary Act of 1789, which established the first federal courts other than the Supreme Court, did not create a separate federal court of appeals with its own judges. Instead, the Act required that Supreme Court Justices sit with local district judges twice a year in each district of the three circuits then in existence. Circuit panels consisted of two Supreme Court Justices and one district judge. The circuit panel had original jurisdiction in some civil matters, concurrent jurisdiction with the district courts in federal criminal cases, and appellate jurisdiction over decisions of the district courts in civil cases in which the matter in controversy exceeded fifty dollars and in admiralty and maritime cases in which the matter in controversy exceeded three hundred dollars. The duty to hold court in the various districts, commonly referred to as "riding the circuits," was intended to keep the Justices