Speeches, Interviews & Writings > Remarks on the release of the Iraq Study Group Report

Remarks on the release of the Iraq Study Group Report 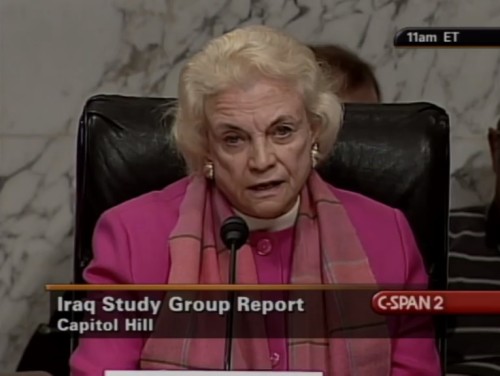 Sandra Day O'Connor
I would be willing to add a comment about what Leon Panetta has just expressed so well. We've said in the report that we agree with the goal of U.S. policy in Iraq, as stated by the president: an Iraq that can govern itself, sustain itself and defend itself. And to do that, we've made these various recommendations on a consensus basis.

It's my belief that if a large segment of our country gets behind that, on a consensus basis, that it's very likely we can move forward and make some progress toward that statement of goals.

And this is not an ongoing commission. It really is out of our hands, having done what we did. It's up to you, frankly. You are the people who speak to the American people. You're there interpreting this and talking to America. And I hope that the American people will feel that if they are behind something in broad terms, that we'll be better off. I think we will, and I hope, in general, others think so, too.