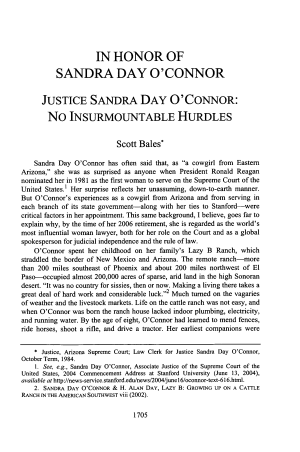 IN HONOR OF SANDRA DAY O'CONNOR

Sandra Day O'Connor has often said that, as "a cowgirl from Eastern Arizona," she was as surprised as anyone when President Ronald Reagan nominated her in 1981 as the first woman to serve on the Supreme Court of the United States.1 Her surprise reflects her unassuming, down-to-earth manner.

But O'Connor's experiences as a cowgirl from Arizona and from serving in each branch of its state government-along with her ties to Stanford-were critical factors in her appointment. This same background, I believe, goes far to explain why, by the time of her 2006 retirement, she is regarded as the world's most influential woman lawyer, both for her role on the Court and as a global spokesperson for judicial independence and the rule of law.

O'Connor spent her childhood on her family's Lazy B Ranch, which straddled the border of New Mexico and Arizona. The remote ranch-more than 200 miles southeast of Phoenix and about 200 miles northwest of El Paso--occupied almost 200,000 acres of sparse, arid land in the high Sonoran desert. "It was no country for sissies, then or now. Making a living there takes a great deal of hard work and considerable luck."2 Much turned on the vagaries of weather and the livestock markets. Life on the cattle ranch was not easy, and when O'Connor was born the ranch house lacked indoor plumbing, electricity, and running water. By the age of eight, O'Connor had learned