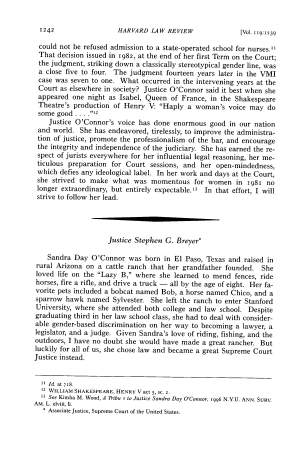 Sandra Day O'Connor was born in El Paso, Texas and raised in rural Arizona on a cattle ranch that her grandfather founded. She loved life on the "Lazy B," where she learned to mend fences, ride horses, fire a rifle, and drive a truck - all by the age of eight. Her fa vorite pets included a bobcat named Bob, a horse named Chico, and a sparrow hawk named Sylvester. She left the ranch to enter Stanford University, where she attended both college and law school. Despite graduating third in her law school class, she had to deal with consider able gender-based discrimination on her way to becoming a lawyer, a legislator, and a judge. Given Sandra's love of riding, fishing, and the outdoors, I have no doubt she would have made a great rancher. But luckily for all of us, she chose law and became a great Supreme Court Justice instead.

Justice Byron White used to say that with each new appointment the Supreme Court is a different Court. I know only the most recent Court, the Court of the past eleven years. But that is time enough for me to understand the enormous benefit - for the Court, for its members, and for the law itself - of having Sandra Day O'Connor as a judicial colleague.

Justice O'Connor has brought to the Court's work, among other