Address to the National Judicial College 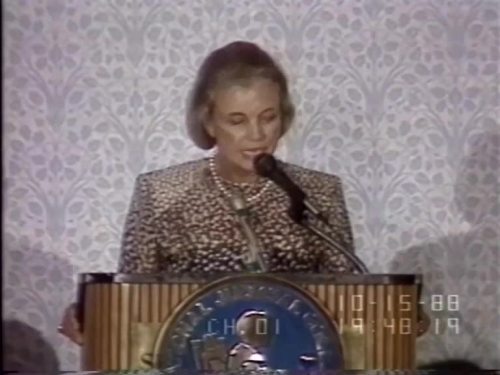 Sandra Day O'Connor [automatically transcribed, may contain inaccuracies]
Thank you to my colleague and friend, justice, Brandon and Mary, and my fellow judges and friends at the National judicial college.

It really is a treat tonight to join with all of you to celebrate the college's 25th anniversary. And don't worry, this is not a speech. It's on the program builders remarks. And that's all it is. We're going to get you out of here in a hurry. But it's wonderful to be an alumna of this college. It has truly an excellent reputation as a professional school. It has never had a losing football team. And it very seldom sends out letters asking the alumni for money and when it does we have to help.

When I was a student at the college in 1974, I had just been elected as a trial judge on the Superior Court in Arizona. And the training I received there must have been all right, because I seem to have progressed somewhat up the judicial ladder since then. And while there are many differences between the judicial positions I've had, I've discovered there are also some basic similarities. At least one party in each case still goes away unhappy. At least one lawyer always thinks you've made the wrong decision. And often at least one lawyer, the one who's won, thinks you've done the right thing for the wrong reason. All of which reminds me of the story of No-Tie Hawkins.

Now Judge Snodgrass has to pardon me for this. He's from Alabama and he knows this story. It was told to me by Senator Howell Heflin, who was Chief Justice of the Alabama Supreme Court before being elected to the United States Senate and Senator Heflin knew a fellow who's a country lawyer in a small town in Alabama. And Judge Heflin's friend's name was Hawkins. He was a trial lawyer. But he had some unusual characteristics, one of which was that he wouldn't wear a necktie. And over the years, he became known as "No-Tie Hawkins."

And several years ago, he lost a case and had to take an appeal to the Supreme Court of Alabama. And his friends said to him, "Now No-Tie. When you go down to Montgomery and argue your case before the Supreme Court, you better put on a necktie." And he thought a while and he said, "No. I figure that might hex me if I did." So he argued his case and his open shirt collar. And nobody said anything to him about his attire. But a few of Judge Heflin's more dignified colleagues in their black robes did give him a few hard looks.

In a few weeks No-Tie received the court's opinion, which revealed that he'd lost his case. And a few days later, No-Tie happened to see Judge Heflin on the street and he said, "You know, my friends tell me the reason I lost my case was because I didn't wear a necktie when I went down to Montgomery to argue." And Judge Heflin tried to assure No-Tie that the judges wouldn't let anything like that creep into their decisions. He said the members of the court decide cases on the law and the facts and never on extraneous circumstances. Judge Heflin said the court decided his case for the specific reasons set forth and the opinion that they'd written. And No-Tie was still perplexed. He said, "Well, all I can say is if you did rule against me because I didn't wear a tie, that would have been a heck of a better reason than the one you gave in your opinion."

Well now, it is important that we once in a while focus on the relationship between the federal and the state courts and the vital role of state courts in our federal system of government, and all the role of judicial education. Mechanisms for resolving disputes are as old as civilization. As Carl Friedrich put it, "The settling of disputes is the primordial internal function which a political order has to perform, antedating the making of rules and the application of such rules in administrative work."

The vast bulk of all civil and criminal litigation in this country is handled in the state courts. More than 13 million civil lawsuits, and more than 12 million criminal actions are filed each year in the 50 states and the District of Columbia. By comparison, there are only approximately 250,000 civil and 35,000 criminal suits filed in the federal courts each year. There are more than 27,000 state and local judges and our concrete a day. And I estimate that more than 2,000 new state and local judges are selected each year.

Most people in this country who have any contact with a court have that contact in a state or local court. It is there that justice is meted out. It is there that impressions are formed about our judicial system today. How are our courts measuring up in public opinion today? Not as well as we'd like, I fear. Perhaps the bulk of the criticism falls on the lawyers practicing in our court rather than the judges. But court congestion and delay and the high cost of legal services means that all too often the processing of lawsuits costs more than the value of the recovery.

Some agree with Judge Rudy Gerber, another graduate of the college and a fellow Arizonan who says, "The American court system of the 1980s has become a dinosaur lumbering toward extinction because of its rigor and complexity. Their rigidity and complexity have reduced them to cumbersome and arbitrary lotteries." Well, that's a pretty harsh statement. But one can cite examples of excessively lengthy processes of jury selection and civil and criminal cases stretching into weeks or months.

And the public reads sometimes with despair of the length and difficulty of cases in the courts, such as the recently completed civil court suit that required three-and-a-half years of trial time. It was based on the claim of 65 people to damages when one-half teaspoon of dioxin escaped in a 1979 tank car derailment. At the end of the three-and-a-half years, the jury rendered an inconsistent verdict, concluding the plaintiff suffered no injury from the spill, but rewarding them nevertheless a multi-million-dollar judgment because the defendant company had known that dioxin was in the tank car.

Well today, the pressures of case loads and the tactics of some, we hope not many, too-aggressive lawyers have threatened to undermine the assumption that the adversary system and the jury trial will produce a just result. Pre-trial discovery can be abused and it can be used to cripple the opposing party by the sheer volume and cost of production. Plea bargaining in the criminal area, and delay and gamesmanship at every stage of the proceedings can contribute to the public's disenchantment. The tendency to instruct jurors only orally and in complex legalese, and the frequency of appellate court reversal based on faulty instructions, has further tilted the windmill of justice toward a storm front.

Judges today need management. They need organizational skills to help promote settlement of cases and to better control the scope and the timing of legal proceedings and control to an extent because it's no longer enough just to be learned in the law. If you want to be a judge. Judges need to learn how to improve the handling of cases in their jurisdictions. Perhaps only 3% of all cases file go to trial. But the judges need to be concerned with the other 97% as well.

All this indicates there is an increasing need for judicial training and education. Merely to keep up with recent developments in the law at both the state and federal levels requires almost unceasing studying, reading of recent cases and articles, and participation and training in education programs. But more than that, judges both new and experienced need instruction in case management and administration.

One of the major venues of programs such as at the National Judicial College is the opportunity it gives for judges to step back from the crush of that daily pressure of cases, to think about the basic principles underlying our system, our judicial system, and think about its problems, its defects, and its needs. It provides an opportunity to look at the proverbial forest rather than the individual trees. And judges can return from that experience invigorated and equipped with a better framework for deciding the crush of individual cases we see each day and better equipped to tackle the overall problems that are burdening our judicial system.

Now, these are times of tight budgets at all levels of government. The large federal grants for training programs are no longer available. But the need for the education and training has not diminished. It's my hope that we can and will continue to recognize at the state and local levels across this nation, the value of good training programs for our judges. Despite the problems, the demands for judicial services are continuing to expand. And the stage is set for greater reliance than ever on state court decisions. We have to take this challenge very seriously and pursue improvements in our courts as vigorously as we can.

We all wish the National Traditional College and UD Mall us well in the second quarter century. The need for ...[video clip ends]