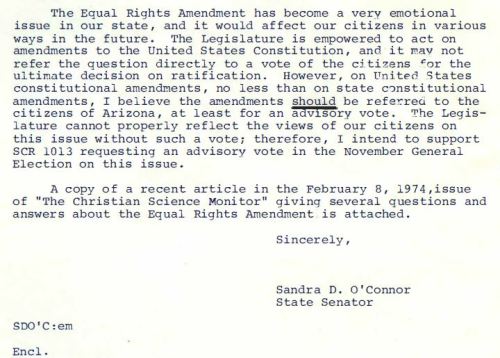 I find myself in a difficult position concerning the Equal Rights Amendment. I do not share the concern expressed by some that its ratification would threaten family life as we know it or that it would deprive women of their freedom. On the contrary, the Equal Rights Amendment recognizes the fundamental dignity and individuality of each human being and rests on the basic principle that sex should not be a factor in determining the legal rights of men or women. The Amendment affects only governmental action. It does not affect private actions or the private and personal relationships of families and husbands and wives.

The Senate Congressional Judiciary Committee report on the Equal Rights Amendment merits consideration. It reports that "equality" does not mean "sameness." The report states that the Amendment would not prevent reasonable classifications based on characteristics unique to one sex, nor does it prohibit the states from requiring separation of the sexes under certain circumstances, as in public hospitals, institutions, or restrooms.

On the other hand, many sincere and genuine questions have been raised about the interpretation of the broad general language of the Amendment, and these questions would, no doubt, require litigation to resolve them. However, as stated by Justice William H. Rehnquist when he testified in favor of the Amendment before the House Judiciary Committee in his former capacity as Assistant Attorney General of the United States, "The desirability of obtaining some such declaration of policy in the Constitution outweighs the disadvantages of this particular proposal."

The Equal Rights Amendment has become a very emotional issue in our state, and it would affect our citizens in various ways in the future. The Legislature is empowered to act on amendments to the United States Constitution, and it may not refer the question directly to a vote of the citizens for the ultimate decision on ratification. However, on United States constitutional amendments, no less than on state constitutional amendments, I believe the amendments should be referred to the citizens of Arizona, at least for an advisory vote. The Legislature cannot properly reflect the views of our citizens on this issue without such a vote; therefore, I intend to support SCR 1013 requesting an advisory vote in the November General Election on this issue.

A copy of a recent article in the February 8, 1974,issue of "The Christian Science Monitor" giving several questions and answers about the Equal Rights Amendment is attached.