Speeches, Interviews & Writings > Reflections on Preclusion of Judicial Review in England and the United States 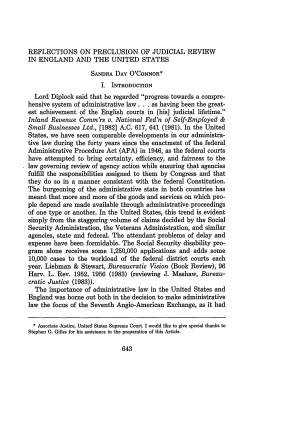 INTRODUCTIONLord Diplock said that he regarded "progress towards a compre hensive system of administrative law... as having been the great est achievement of the English courts in [his] judicial lifetime." Inland Revenue Comm'rs v. National Fed'n of Self-Employed & Small Businesses Ltd., [1982] A.C. 617, 641 (1981). In the United States, we have seen comparable developments in our administra tive law during the forty year.s since the enactment of the federal Administrative Procedure Act (APA) in 1946, as the federal courts have attempted to bring certainty, efficiency, and fairness to the law governing review of agency action while ensuring that agencies fulfill the responsibilities assigned to them by Congress and that they do so in a manner consistent with the federal Constitution. The burgeoning of the administrative state in both countries has meant that more and more of the goods and services on which peo ple depend are made available through administrative proceedings of one type or another. In the United States, this trend is evident simply from the staggering volume of claims decided by the Social Security Administration, the Veterans Administration, and similar agencies, state and federal. The attendant problems of delay and xpense have been formidable. The Social Security disability pro gram alone receives some 1,250,000 applications and adds some 10,000 cases to the