Speeches, Interviews & Writings > Trends in the Relationship Between the Federal and State Courts from the Perspective of a State Court Judge 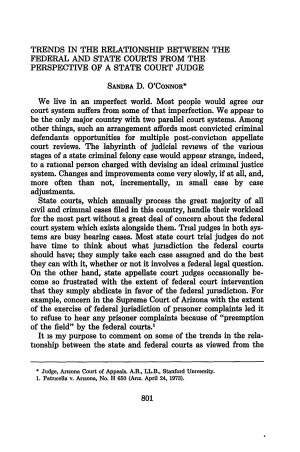 We live in an imperfect world. Most people would agree our court system suffers from some of that imperfection. We appear to be the only major country with two parallel court systems. Among other things, such an arrangement affords most convicted criminal defendants opportunities for multiple post-conviction appellate court reviews. The labyrinth of judicial reviews of the various stages of a state criminal felony case would appear strange, indeed, to a rational person charged with devising an ideal criminal justice system. Changes and improvements come very slowly, if at all, and, more often than not, incrementally, in small case by case adjustments.

State courts, which annually process the great majority of all civil and criminal cases filed in this country, handle their workload for the most part without a great deal of concern about the federal court system which exists alongside them. Trial Judges in both systems are busy hearing cases. Most state court trial judges do not have time to think about what jurisdiction the federal courts should have; they simply take each case assigned and do the best they can with it, whether or not it involves a federal legal question. On the other hand, state appellate court Judges occasionally be come so frustrated with the extent of federal court intervention that they simply abdicate in favor of the federal